Criticism of ‘Babylon’: For and against Damien Chazelle’s film in the controversy of the month

The premiere of ‘Babylon’, Damien Chazelle’s new film, forces us to review the best and worst of a title that stars in our controversy of the month.

In favor, by Ricardo Rosado

Good news for moviegoers who want to enjoy themselves, prepare your best clothes for a festival of triumphs, failures and excesses as bombastic as only the mythological classic Hollywood is capable of providing. Intoxicated by another fascinating soundtrack by Justin Hurwitz, an accelerated Damien Chazelle tells us about his fascination with ‘Hollywood Babylon’, the fundamental book by Kenneth Anger, using a wonderful Diego Calva as a guide in a grotesque and bumpy odyssey.

The worst: its embarrassing final minutes.

As irregular as it is magnetic, ‘Babylon’ is an essential shot in which Margot Robbie and Brad Pitt not only know they are the brightest stars in the firmament, but also make it clear that they have enjoyed the experience as much as the most dedicated spectator to the refractory Chazelle, a filmmaker who continues obsessed with stressing that personal happiness does not allow success while, desperately, he tries to prove to himself that he has indeed achieved excellence. We may take advantage of him, but if he keeps throwing parties filled with overflowing mansions, filthy slums, wild film shoots, and performers willing to dance on the edge for applause before slipping off the edge, it’s easy to put up with his intoxicated spiel on the edge. coming out of the sarao in which we have had such a good time. 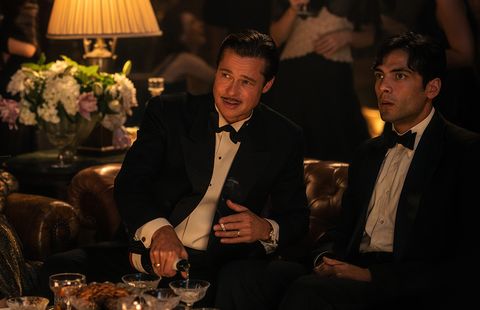 Against, by Beatriz Martínez

Damien Chazelle has always been an ambitious director, with an obsessive point just like his characters. There is nothing wrong with that, however, his films have always generated mixed opinions, as if there was something in them waiting to explode, a certain degree of unsympathetic arrogance. And that sensation is unleashed now without restraint in ‘Babylon’, in which it must be recognized that it bets big, on expressive madness, on plastic delirium, on bacchanalia and madness, but under all those layers that could seem attractive because of what is subversive in current cinema, end up getting lost through an absolutely megalomaniacal speech. In this case, his claim is to pay homage to cinema, placing his work at the level of the great masters who endure over time and go down in history, nothing more and nothing less. And for this, he resorts to self-indulgence, with an almost pathological need to compose memorable set-pièces, which, although they work independently, end up constituting empty pompous exhibitions amidst a chaotic and deliberately uproarious narrative.

The best: the set-pièce of the bacchanalia.

In the end, the noise remains, the images, the need to penetrate through them, to transcend, but nothing more. An exercise in superlative narcissism as hollow as it is irritating and amorphous.

Synopsis: Set in 1920s Los Angeles, it tells a story of ambition and inordinate excess that traces the rise and fall of multiple characters during a time of rampant decadence and depravity in early Hollywood.

Emily Jhon is a product and service reviewer at Gossipify, known for her honest evaluations and thorough analysis. With a background in marketing and consumer research, she offers valuable insights to readers. She has been writing for Gossipify for several years and has a degree in Marketing and Consumer Research from the University of Oxford.

Criticism of ‘Decision to Leave’, a new twist by Park Chan-wook

Alec Baldwin’s wife thanks for support after actor charged with murder: ‘I don’t feel so strong’

Grammys 2023: see where to look, the list of contestants and who will perform at the awards

Anitta should retire as a singer in 6 years

With over 80 million streams, Os Quebradeiras are preparing for their tour in Brazil

Criticism of ‘Decision to Leave’, a new twist by Park Chan-wook

In the style of Y2K: Nicola Peltz became the face of the new advertising campaign of the brand GCDS

Look of the day: Rita Ora in a transparent latex dress

Learn how to make gravy sauce with this classic recipe

Test: Can you guess why these objects from the time of the USSR are needed?