The touching detail of ‘Heartstopper’ that you have overlooked

I’m not crying. You are crying.

‘Heartstopper’ could be the most beautiful series ever made, and it’s not just the story of Nick (Kit Connor) and Charlie (Joe Locke) that moved us. While the two secretly looked at each other in the corridors of Truham, another love story also hit us in the heart. And no, we’re not talking about Isaac (Tobie Donovan) and his incredible collection of books.

Throughout the first season, ‘Heartstopper’ hints that there could be more to Elle’s (Yasmin Finney) and Tao’s (William Gao) relationship than either of them would like to admit.

From the start, it’s clear that Elle’s transfer to Higgs has been tough on Tao. Although he no longer attends school, Tao still buys Elle’s favorite apple juice, as if she is still there. And, although Elle misses the whole gang to some extent, it’s quite obvious that she misses Tao more.

As things go the couple practically becomes inseparable and texts incessantly when they’re not together. However, although Elle finally realizes her feelings for Tao, she retracts at the last moment to tell him, which leaves their chemistry up in the air…

However, at the end of the first season, Elle isn’t the only one surrounded by illustrated leaves and all the other cute details this show uses to signify love..

Yes, Tao is also in love with Elle, though that has been obvious to everyone except Tao from the start. But aside from all the chemistry William Gao and Yasmin Finney share in their scenes, there’s another touching little detail that hints at the true depth of Tao’s love for Elle. 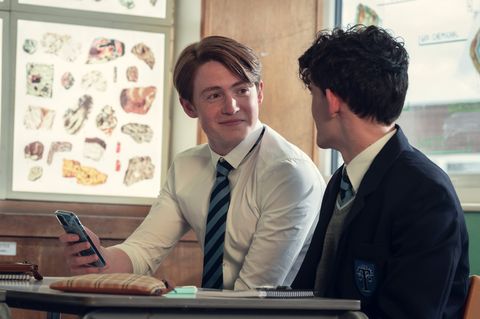 While we don’t see this happen directly on the show, ‘Heartstopper’ fans know that Elle used to get suspended a lot in Truham before she came out as trans. The reason for this is that she grew her hair longer than the school dress code allowed.

Knowing this, several fans suspect on social networks that this could be why Tao also has the longest hair on the show. To support Elle in her transition, Tao also grew his hair long. And that would also explain why it’s rolled up at the bottom, and that’s because it allows her to keep her hair longer while still technically adhering to that restrictive dress code.

It’s a subtle but important detail, and it’s also backed up by comparisons to the source material. In the comics, Tao has shorter, messier hair, but here, Netflix made a deliberate decision to style it in this unique way. Why else would they make a change like this if not to impart some additional meaning?

Unfortunately, there is no official confirmation that this was actually intentional or at least not that we can find. But Tao is fiercely loyal to the people he loves, sometimes to his own detriment.

When Charlie was being bullied at school, Tao was the one who stood up for his friend the most, so it’s completely in character to imagine him doing the same for Elle, whether he knew how much he really liked her at the time or not.

But now, at the end of the first season, those feelings have become stronger than ever. And it seems that soon they will also be reciprocated, which is why the story of ‘Heartstopper’ must continue in a second season.

This is us: “strong” or “disappointed”, the last episode of the series divides the fans!

Dawson Quiz: 10 questions for true fans of the series

Tonight on TV: A politically incorrect comedy with 12 million viewers

Men on the verge of a nervous breakdown: Audrey Knife under the skirts of girls

Cannes 2022: Coco Rocha, Naomi Campbell, Sara Sampaio at the premiere of “The Decision to Break Up”