We put together the theories about the character’s identity: does it have something to do with Dolores? Is she a robot or a human? And why is she going to be so important in these new episodes?

The mysteries of ‘Westworld’ never end, and with the fourth season we have added a very important one: who is Christina, the new character brought to life by Evan Rachel Wood?

If we remember, the actress has been leading the cast since the beginning of the HBO Max series, but she has been doing it as Dolores, the android who rebels against her captors and becomes the head of a bloody revolution against the slave-owning human race . But it seems that Dolores is not Christina, although she is also played by Evan Rachel Wood: We are facing a new character that (as far as we know) has nothing to do with Dolores, who “died” (or was erased) in the finale of the third season of ‘Westworld’. So where did this new character come from? And why does he share a body with Dolores? And why is there a strange guy chasing after her for repairs?

Who is Christina in ‘Westworld’?

Christina is a video game writer at Olympiad Entertainment who dreams of bringing the stories she loves to the screen., but the company where she works only wants dramatic, violent and dark stories to engage their clients, and for now she has been relegated to writing secondary characters. Christina is shy and somewhat asocial, to the point where her friend Maya (played by Ariana DeBose, recent Oscar winner for ‘West Side Story’) has to push her to leave the house and date men. . But Christina seems to be submerged in a chronic melancholy, which is joined by an unpleasant situation: a stranger keeps harassing her on the phone and in person about a plot she wrote in a video game that, it seems, has ruined her life. . After the first episode of the season of ‘Westworld’, this is all we know about her.

In statements to Entertainment WeeklyEvan Rachel Wood said of her new character, “She’s a lot more human this season, so that was fun. I think most people come to the show and think, ‘Oh, I wish I was a robot,’ and I think the pleasure for me was to become vulnerable and somewhat human in this season 4”. And she continued: “This season I felt a little more like a nerd with Christina, honestly: she’s a nerd, lonely screenwriter just trying to make it in the big city. She yearns for beauty, romance and poetry in this mundane world she lives in. She has that ability, like Dolores, to notice when something is wrong in her world, and she has the mindset to question it. There are a lot of conspiracy theory metaphors this season.Is it crazy to think that something else is going on below the surface and we should be asking questions, or is it crazier to just take things at face value and never question anything?”

Intriguing, of course. The actress throws some interesting clues about Christina in these statements, but, until ‘Westworld’ gives us definitive answers, we have a number of theories of what his true identity could be.

Theory 1: Christina is a hostess at Futureworld 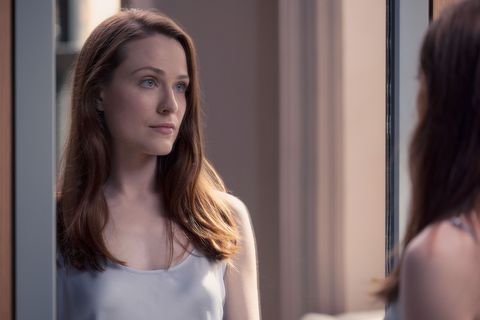 At the moment, the most popular theory among ‘Westworld’ fans is that we are before the presentation of a new theme park of Delos: Futureworld. We saw this park for the first time in one of the films of the franchise, ‘Future World’ from 1976, a sequel to the original ‘Souls of Metal’ from 1973, directed by Michael Crichton and again starring Yul Brynner.

In the HBO Max series, we know that Delos has six robotic theme parks, and of them we have only seen four: Westworld, Shōgunworld, Warworld and The Raj. Therefore, one of those two remaining could well be Futureworld, although at first it would be quite different from its predecessor. In the film it is a simulation of a space station, and, as in the rest of the parks, it is full of robots that conduct secret experiments with their visitors with the aim of cloning them. The intention of the owners is to create clones of world leaders to supplant them.

We are sure that the series will go in other directions, but Futureworld’s existence in the ‘Westworld’ universe is a likely bet and perhaps we’re seeing it with Christina. Here are the clues: Christina has the same daily routine that Dolores used to have, getting up in the morning in bed, making the same gestures, going to work… Also, some people are heard saying “this place is crazy” , in what many fans have seen as a reflection of what Westworld park visitors were saying in the first season.

This would make Christina a hostess, a new model of Dolores (which, after all, is one of the original blueprints from which many Delos robots have been molded) to a different world.

Theory 2: Christina is a flesh and blood human

At the moment, all that has stood out about Christina is her humanity, so… could we really be dealing with a person of flesh and blood? That possibility opens many paths. “For three seasons I’ve been living by the rules of what it means to be a host. It’s been fun for me to approach this season from the perspective of a human being”told Evan Rachel Wood in den of geek, although he also warned that, at the end of the day, this is ‘Westworld’. There will be plot twists and layers of meaning. Nothing is what it seems.

However, it seems like an interesting possibility that Christina is a human. Could she be a clone of the robot? Or perhaps the human woman who inspired the image of Dolores in the first place? 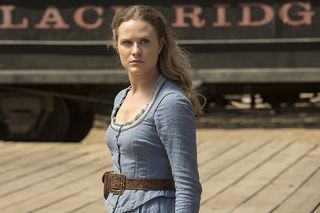 The parallels that we mentioned before between Christina and Dolores regarding their routines could indicate something more than simply that they are both robots: maybe inside Christina there is still Dolores. And it is that both share details that go beyond having a metal soul, such as their narrative ideas, their innocence, their taste for painting, their blue-toned wardrobe or their belief that there must be something more than what life is offering you.

But of course, all these similarities could be a diversionary maneuver on the part of the creators of the series, wishing to confuse the spectators as much as possible with deja vu so that we do not look (yet) under the layers that its history hides. Says co-creator Lisa Joy in she: “Dolores had already evolved and changed a lot and reached the end of her journey, but I think [encontrar] a lot of resolution and peace between these oscillations, between victim and perpetrator, and then finding this middle ground. We wanted to explore a totally different dimension to a character that Evan could play. And it was so exciting to be able to write this and see the sea change in Evan’s performance.”

And, as Evan Rachel Wood herself recalls in reverseWhether or not it refers directly to Christina, Dolores will never be able to go completely. There is a part of Dolores in each and every one of the “mostly robot” characters in the series. Awareness of her was not only implanted in various hosts during the robot revolution, including Tessa Thompson’s character Charlotte Hale, but as one of the original hosts, she served as a model for every model she followed. “She’s in all of them, in a weird way, and part of her still lives on through Charlotte Hale. Dolores never died.”.