Lucca Comics & Games 2022 – The national preview and all initiatives related to One Piece Film: Red

After revealing TOEI Animation Europe and Anime Factory to be brought premiered at Lucca Comics & Games 2022 the biggest One Piece event never seen in Italy and announced the presence of the director, the master Gorō Taniguchiwho will be there on Saturday October 29 at the national premiere of the film One Piece Film: Redthe organization of Lucca Comics & Games 2022 presents all the incredible initiatives that await us in Lucca from 28 October to 1 November to participate in a unique celebration and may break some records.

One Piece Film: Red has broken all records in 2022: best film of the One Piece franchise, best anime film of 2022, more than 10,000,000 admissions in Japan, more than 1,000,000 admissions in French Europe. Toei Animation wants to be linked with Lucca Comics & Games 2022 to bring Italian fans of One Piece the greatest experience to celebrate what it is, without a doubt, the year of One Piece!

One Piece Film: Red brings pirates, fans and sailors to the island of Elegia for a great celebration. Also, all One Piece fans present in Lucca, whether in cosplay or not, can enjoy the festival by having One Piece Film: Red throughout the city and enjoy all the planned activities, carried out with many partners.

The Italian premiere of One Piece Film: Red will be graced by the presence of very special guests: the film’s director, Goro Taniguchi, and the Animation Director, Masayuki Sato. The event is not to be missed, with all the activities organized for One Piece Film: Red.

“We believe that this is the best time to hold this event in collaboration with Lucca Comics & Games. It will be a very important moment of celebration as well as for one piece And One Piece Film: Red. It’s also our way of expressing our gratitude to our fans and celebrating with them one pieceone of the biggest brands in the world of entertainment “he underlines Ryuji KochiPresident of Toei Animation Europe.

“Everything that goes around one piecebut especially in the preview of One Piece Film: RED, is about hope, HOPE, the theme of the 2022 edition. Hope for a better future, hope for the next, hope to be with other fans like us, all in one place, to celebrate the same passions, to share moments and experiences with enthusiasm and a great gratitude, one of the five main values ​​of Lucca Comics & Games. Those values ​​that communities, more than anyone else, can appreciate and strengthen. It is in this spirit that we are honored to host in our cultural program not only the preview, not only the great international guests, but above all the initiatives and fans of one piece that will definitely make this vintage unique”. He added Emanuele VietinaDirector of Lucca Comics & Games.

“It is an honor to launch the official campaign of one piece for the theatrical release of the film in cinemas throughout Italy “he also announced Umberto BettiniCountry Manager Plaion Italia.

Below, from Press releasehere are all the events prepared for Lucca Comics & Games 2022:

After the screening, at 7:30 pm, in a special location you can attend a show with sounds and lights: UTA live from Budokan projection at night! Details will follow in the next few days.

The screening will be preceded by red carpet official in the presence of Japanese guests and part of the Italian cast, as well as celebrated with gadgets and special effects.

Red Carpet starts at 3pm. The ticket price for the premiere of One Piece Film: Red it is included with the Lucca Comics & Games ticket valid for Saturday 29 October. Details on how to book premiere tickets will be announced in the coming days.

Come, cosplayers or simple sailors, and sing with us to send a special message to sensei Oda to thank him for creating our dream.

We’ll play karaoke with you and then we’ll sing as loud as we can, together the historic opening theme song of one piece“We are”!

The event will depend on the presence of the great guide of Emanuela Pacottoaka WE!

A musical parade will bring you all back to the stands one piece. The event starts at 2:30pm.

The time of the event will be announced later.

Here is the list of events and activities that Lucca Comics & Games fans can experience every day.

For those who complete the treasure hunt there will be an exclusive gadget One Piece Film: Red x Lucca Comics and Games. In addition, they will participate every day in obtaining 3 mega bags with One Piece products worth more than 300 euros.

All participants will receive, along with the map, a cardboard straw hat to wear.

The map and the straw hat will be distributed next to the stand One Piece Film: Redand at the stands of One Piece partners present in the Japan Town area.

BEWARE OF THE PIRATES! 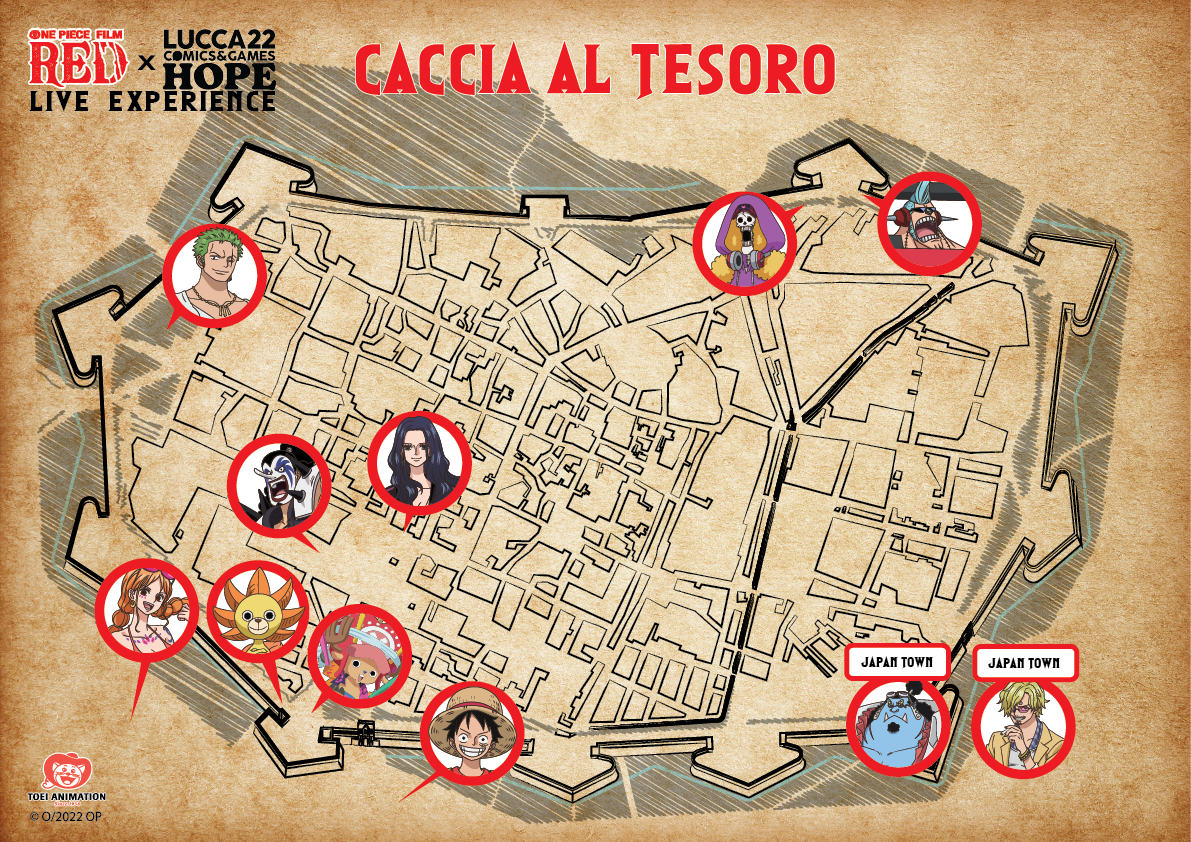 Star Wars: Why Ewan McGregor Said About the Role of Obi-Wan

Charlby Dean: An Exciting Interview of the Untimely Disappeared Actor Without a Filter

Bruce Willis is back on screens…thanks to deepfake?

Dark circles: Dermatologists teach how to treat the different types

Gemini, but not so much: where does the delirious pitch of this comedy with Ahmed Silas come from?

Tonight on TV: Jennifer Lopez in her best role

“Hope, but tense”, says Alessandra Negrini about the presidential elections

Daniela Mercury follows the presidential poll: ‘I have hope’

The expert explains how to profit from streaming and music copyright